World War I uniforms were supplied by countries including the U.S., England and Germany to soldiers who entered the war. Although WWI is long over, passionate collectors and history buffs have kept these uniforms an important part of world history. Teachers, parents, students and history enthusiasts can find elements online with which to recreate World War I uniforms.

American soldiers were provided with uniforms by the government. There were many uniform variations, from jackets and woolen coats to the 'trench coat' that became famous during World War I. Locating accurate - and comfortable - WW I uniforms can be a challenge, but there are several excellent sources available.

The typical U.S. Army soldier was issued a green wool uniform that included breeches and a waist-length jacket. A wide-brimmed hat was included, which protected the men from sun glare and driving rain. Also important to his uniform was a blanket roll, a bag for personal items, a small shovel and a canteen that hung from the belt. The government issued the uniform with a .30 caliber U.S. Army rifle. 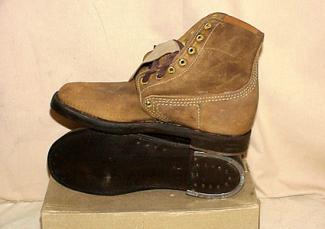 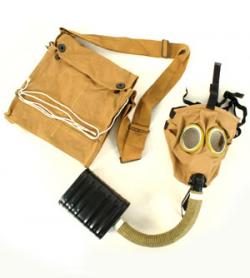 Army soldiers could earn rankings, called marks or insignia, for their duty and performance. For example, an enlisted Army soldier may have boasted one of 12 various distinguishing marks for their rank. This included patches that showed their rank ranging from U.S. Regular Army to National Army and U.S. Volunteers. To see some of these insignia, this image from Ancestry.com offers details. Griffin Militaria offers many patches for sale, for $6 each.

While American uniforms are highly collectible and sought after, other uniforms from countries that fought in WWI are interesting as well. During this period, many European armies had a mixture of formal, embellished uniforms, coupled with the more durable soldier uniforms that could withstand the trenches, weather and camp life. The British army in World War I wore functional and practical uniforms. A tunic and trousers were the common uniform, with flat hats and leather equipment carriers. 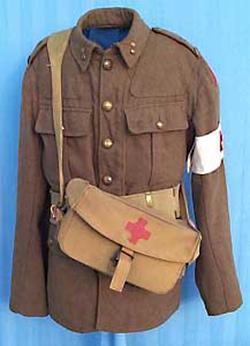 The German Imperial Army was made up of several nations and had many different uniforms. For example, collars were important in the Austrian-Hungarian uniform, because this is where the soldier's rank was worn. The Waffenrock tunic was made of grey wool with red piping down the front. The soldier would have also worn dark trousers and a cap, called a "fieldmutz" cap, with red borders and buttons. You can purchase these uniforms in separate pieces or as a set. 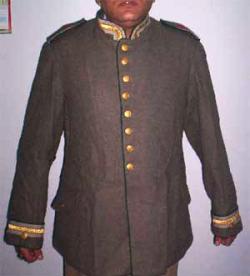 With the centennial of World War I in 2014, interest in war uniforms and reenactment clothing has grown. Just remember that many of these uniforms are now handmade and special orders, so factor in the extra time when planning your battles.