The style of Venetian masquerade costumes is such that you can be as elaborate as you like and might still be tame compared to someone else's get-up. Costumes usually hearken back to previous centuries and walk a line between being beautiful and sinister. Whichever you prefer is acceptable, just know that you can never be too grand.

Linked to the Venetian celebration of Carnival before the beginning of Lent, the tradition of masked balls in Venice began sometime in the middle ages. The dances were a feature of the ducal court during the Renaissance and were restricted to the wealthy. Costumes might represent characters, artwork, seasons or whatever the wearer wished and the tailor was capable of creating.

The most important aspect of the costume was the mask. The idea was to completely conceal the wearer's identity, thus allowing everyone to behave with a licentiousness that was otherwise frowned upon. While originally the mask was worn for protection, it gradually just became part of the expected style, allowing flirting to continue unabated.

The tradition of the balls spread throughout Europe, and many were held at any time of year, not just Carnival. They were, however, usually still referred to as Venetian masquerade balls.

The most common Venetian masquerade costumes worn today are those that recall the origins of the balls. Late medieval and Renaissance clothing is preferred, although anything up to the Victorian era is acceptable. Some people go for a more Gothic look, while others opt for something delicate and pretty. Everyone is elegant.

Many people like to do as was done in the past and wear a costume that suggests a theme. This can be very nice if you are going as part of a couple or a group. In this case, you must be able to sew or be prepared to hire someone to make the costumes. You can go as characters from Commedia dell'Arte, or as subjects in a famous painting. A group of four might like to represent the four seasons. Animals are highly popular as well, both real and fantasy. 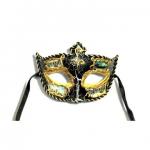 If you are going to a ball in Venice itself, you will more than likely want to make or commission your costume. Most people, however, find it easier to rent a costume or buy something ready made if they think masquerade balls might become a regular feature in their lives.

An excellent source for Venetian masquerade costumes is A Masquerade, which has hundreds of costumes for rent or sale. Not only do they have the costumes, they also have corsets, wigs, footwear and of course, masks. They can also do special orders. Historical costumes appropriate for masquerade balls are divided into sections for easy browsing. These include: Renaissance, Pirates and 18th Century, 1795-1837 Regency, 1812-1865 Old South, 1837-1901 Victorian, 1865-1890 Wild West and, if you like, 1901-1918 Edwardian.

If you want something very high-end and customized, try Romantic Threads. You can get gowns suitable for a medieval, Renaissance, Gothic or steampunk look. They also have plus sizes. Be sure to allow at least six weeks after placing an order.

Many costumes are designed to match specific masks. It is nice to have a mask with a bit of personalization, so one good option is to buy a plain white mask and then decorate it yourself to match your costume. If you have had your costume made or are sewing it yourself, you can ask for some leftover trim to glue to your mask. Otherwise, you can paint the mask in similar or contrasting colors and add whatever trim you think works. Masks can be as voluminous as you like, although for the sake of both safety and comfort, you may want to keep any feather trim from being wider than your shoulders. Other than that, you are ready to go to the ball in full and fancy dress.