Roman soldiers wore similar clothing to provide a cohesive look to the army. However, you may be surprised to learn that they did not have an official uniform. Depending on the century, location, and specific situation, soldiers may have worn a variety of clothing and protective items when they went into battle. You can make or purchase many of these pieces for historical reenactment, theater work, or other costumed events.

Most soldiers in Ancient Rome would have worn the following clothing and armor as they marched into battle.

All Roman civilians and soldiers wore tunics. The exact style of the tunics worn by the Roman army varied according to the century in which the soldiers lived. Generally, the tunic was knee length and, depending on the era, may have been long or short sleeved. In the first centuries of the Roman empire, there was a social perception that long sleeves were for women only, so soldiers would have worn short-sleeved garments. Most tunics were made of wool, which could be dyed red or left an off-white color.

The tunic was a very simple garment, and you can make your own without a pattern. For authenticity, hand sew the tunic and leave the wool edges raw. Here's how to do it: 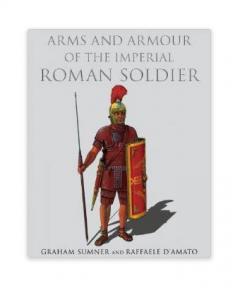 Arms And Armour Of The Imperial Roman Soldier

According to Tribunes and Triumphs, Roman soldiers also wore simple trousers called "braccae" that were made of dark red wool. These trousers were usually knee length, like the tunic, but they may also have extended to the ankle in colder climates.

You can purchase a custom pair of Roman braccae from Wulfund. These trousers are made to your measurements, and you can specify the color, fabric, and length. They cost about $50.

The Focale for Protecting the Neck

According to The Roman Military Research Society, Roman soldiers also wore a focale, or scarf, to protect their necks from their armor. The focale absorbed sweat and kept the armor from chafing the skin. It was usually red and could be made of wool or linen. Soldiers wore it tied loosely around the neck. 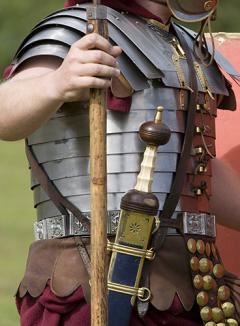 Kult of Athena offers a legionary red focale for purchase. It's woolen and made in the USA, and it retails for about $45.

The Baldric for Supporting Weapons

According to The Roman Military Research Society, soldiers from this era also wore a baldric, or leather strap that passed diagonally over the body. This baldric served to support the soldier's weapons, but because of its diagonal design, it didn't impede his movement.

You can purchase a baldric from Museum Replicas. This all-leather design will support your sword comfortably and retails for $40.

In addition to a Roman soldier's regular clothing, he usually wore protective armor, according to RomanMilitary.net. Depending on the time period and the soldier's means, this armor could take a number of different forms. Some families passed armor down through the generations, and soldiers with limited financial resources probably purchased used armor. This meant that the Roman army could be outfitted in several different armor styles.

Typically, armor consisted of torso armor and a bronze helmet which sometimes held a horsehair crest. Depending on the era in which the torso armor was made, it might be constructed of chain mail, overlapping metal or leather plates, or small metal scales. It usually covered the shoulders and torso of the soldier and extended down to the waist; however, there were many different designs. Additional armor pieces were sometimes used to cover the legs or arms.

You can purchase armor in your desired style from Armour Venue. You'll be able to choose from leather or metal armor, and you can select the style or era you prefer. Prices for torso armor start at about $225.

If you prefer to purchase a ready-made costume rather than assemble your outfit individually, there are a lot of options to choose from. Some are extremely budget-friendly, while others prioritize accuracy. The best choice for you will depend on your budget and how you plan to use your outfit.

Whether you purchase a ready-made costume or design your own custom Roman soldier uniform, it's fun to re-create the look of this ancient civilization. Pay as much attention to the details as you want, depending on whether you're a historical reenactor, a performer in a play, or simply a party-goer looking for a creative costume choice.