If you're planning a reenactment or dressing up for a play, history lesson, or costume party, it's important to understand the intricacies of the Patriot uniforms during the Revolutionary War. In contrast to the British uniforms, there was a great deal of variation in what the citizen militias, officers, and other participants wore during this important conflict. Many of these elements are available for purchase, allowing you to create the ideal look for your situation.

Uniforms of the Militiamen 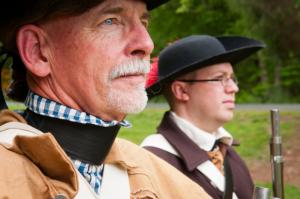 The Minutemen and militiamen were farmers, blacksmiths, shop owners, and other members of Colonial society. Because of this, they didn't have a set uniform, and the Continental government did not provide one for them. According to the West Virginia Society of the Sons of the American Revolution, most arrived for battle wearing their own clothing. A typical militiaman might have worn the following garments.

The majority of militiamen wore a hunting frock crafted from very heavy linen. It had a loose fit and wide, full collar with a fringe. The shoulders were dropped slightly, allowing easy movement for lifting and aiming a rifle.

American Heritage Clothing offers this type of frock coat for purchase. This retailer has constructed the coat using an original pattern and carefully-sourced heavy linen. This authentic look retails for $145.

In addition to the hunting frock, most militiamen wore a waistcoat or vest. The collarless and sleeveless garment was cut loosely and came down to below the hip. It buttoned up the front and sometimes had pockets. Typically, this would have been made of linen or wool.

Finding a waistcoat for purchase is a challenge. However, it's easy to make your own using a 1770s Waistcoat Pattern. This simple pattern and instructions, available for about $10 on Amazon.com, will walk you through the process of sewing an authentic garment.

On the bottom, most militiamen sported breeches and stockings. The breeches, usually made of linen or wool, ended in tight cuffs just below the knee. Most were in shades of brown or blue. Stockings or long socks attached to the breeches with garters.

Smiling Fox Forge is a good source for breeches. You can order a pair in your choice of fabric, including cotton, linen, and wool. They come with pewter button and cost about $100, depending on the fabric and size.

Uniforms of the Continental Army 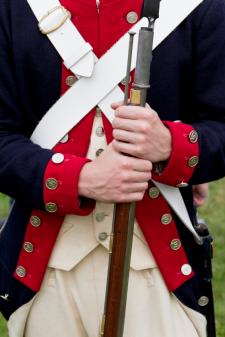 The patriots of the Continental Army also had a great deal of inconsistency in their uniforms. According to the Sons of the American Revolution in the State of California, they wore brown or blue coats prior to 1779. In 1779, George Washington issued an order dictating the official uniforms for the Army. There was still some variation, based on fabric availability and financial challenges, but the official uniform consisted of the following.

Washington decided that blue should be the official color of the Continental Army and ordered that soldiers wear a frock coat in this color. The facings, or lapels and color, and the lining of the coat were different colors, depending on the soldier's state. These are a few examples of the color combinations:

American Heritage Clothing will make an American regimental coat to your specifications, matching the lining and facing to the colors of the state you wish. The linen and wool coats are extremely detailed and feature metal buttons. They retail for about $450.

The soldiers of the Continental Army also wore waistcoats under their frock coats. The waistcoat was usually tailored and featured a slightly flared hem for easy movement. It buttoned up the front with several metal or bone buttons and could be constructed from blue, buff, white, or brown linen or wool.

You can find a great reproduction waistcoat at Smiling Fox Forge. This retailer makes the garment after an actual 1770s waistcoat in their possession. You can specify the color and fabric, as well as the size. Depending on the options, this waistcoat costs about $150.

Continental Army patriots wore breeches or full-length pants called "overalls." The full pants included integrated garters to cover the shoes and were fitted in the lower leg. The overalls and breeches were usually white, although there was some variation depending on location and fabric availability.

You can order regimental overalls or breeches from American Heritage Clothing. Both come in linen, wool, and cotton and start at around $125.

Many militiamen and members of the Continental Army wore tricorne hats. This distinctive three-cornered headwear had a practical purpose: it channeled water away from the soldier or militiaman's face. Made of wool felt, beaver fur, and other materials, the hat sometimes featured accents of braid, lace, or feathers.

You can purchase a tricorne hat to go with your patriot outfit from Jas Townshend and Son, Inc. This hand-finished tricorne is made of black felt and features a rosette and your choice of black or white trim. It retails for about $78.

The uniforms used by the Patriots during the American Revolution symbolized more than just the side on which they fought. The simple, everyday clothing of the militiamen showed their status as civilian soldiers, and the red, white, and blue used in the Continental Army uniforms came to stand for the United States.

1
Comments
© 2006-2021 LoveToKnow, Corp., except where otherwise noted. All Rights Reserved.
Patriot Uniforms During the American Revolution