Patriotic dog costumes are ideal for all-American fun. Whether your pooch is dressing up for Memorial Day, 4th of July or Veteran's Day, a little red, white and blue can go a long way. Let Fifi or Fido shine while paying homage to the land of the free and the home of the brave.

Fortunately, there is no shortage of ideas for patriotic pooch costumes. The following choices allow your dog to show off his pride without compromising his range of motion or making him look too over the top:

If you fear your dog will be too hot in a head-to-toe costume, then simply add a patriotic hat to his head. Ready-made and custom patriotic headpieces for dogs are available in stores and on the Internet. Most are made from tasteful stars and stripes fabric and stay on with an elastic band that straps under the chin or is fastened by ribbon ties. You can also choose from a 4th of July-inspired bonnet or an elaborate black suede Bicorne hat with fancy gold straps and buttons that will transform your dog into a mini Napoleon Bonaparte.

It's not hard finding places to purchase patriotic dog costumes. Many costume shops and some pet stores sell dog outfits appropriate for patriotic holidays. Bear in mind most merchandise is sold on a limited basis. The best selection of all-American costumes for dogs is found on the Internet. Not only do the following websites offer a wide array of patriotic getups for pups of all shapes and sizes, they sell them year-round:

How to Make Patriotic Costumes for Dogs 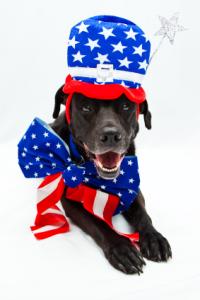 If you prefer to put your own spin on patriotic costumes for dogs, then create your own at home. An easy option is to purchase American flag print material from a fabric store and sew a romper or cape using your dog's exact measurements. If you are not an accomplished seamstress, then simply purchase a plain white shirt for dogs and attach star stickers or use gold glitter glue to embellish a red tee with stars and stripes. You could also add a doggie bow tie and matching top hat to enhance the look.

Always remember, when you are making a homemade patriotic pooch costume, it's vital to get the correct measurements. Don't just take a scissors to a large piece of camouflage fabric and cut out random pieces to make a doggie costume. A costume should fit just right so your dog's movements are not confined. The costume should also not be so loose that your pup is prone to trip on it. Finally, if your dog wants nothing to do with a costume and tries to tear it off with his teeth or paws, then remove the getup immediately.