Much of the attire from the Civil War era was handmade by family members or by seamstresses hired by the wealthy. Clothing wasn't just for style, but it also indicated status in the society. While colorful, embellished garments symbolized affluence, simple, modern frocks and apparel were for commoners.

During the Civil War, the Northern Union armies wore navy blue uniforms and the Southern Confederate armies wore grey. However, for those not fighting in the war, men typically wore a vest, trousers, and coat set with wool being the common factor. Not to mention hats and brogans - or heavy, ankle-high shoes or boots - were amongst the accessories utilized by the men of this precise day and age.

The Confederate Officer uniform often changed due to a variety of reasons such as location, limitations on the supply of materials, and state regulations during the war. The typical uniform consisted of a slouch hat, gray shell jacket, trousers, and brogans.

Rather than heavy knapsacks, they carried their bedding rolled in a blanket and threw it over their shoulder. Most pieces are sold separately and there are a variety of reliable websites that offer unique pieces for your reenactment or costume. 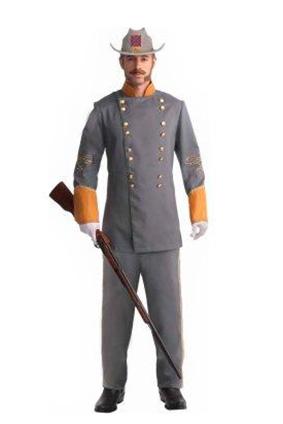 Similarly to the Confederate Officer, there were many changes to the Union Officer uniform during the span of the Civil War. Union Officers generally wore a blue forage cap with black leather visor, a dark blue sack coat, matching wool trousers, and leather brogans. In his knapsack lived a tent, groundsheet, and overcoat, along with a rolled blanket attached to the straps.

An important part of the Civil War took place on the high seas or the rivers which flowed through the South. The sailors or navy men typically wore a blue wool jumper, blue or white wool trousers, a flat hat, a black silk neckerchief, brogan shoes, wool socks, and a black leather waist belt. 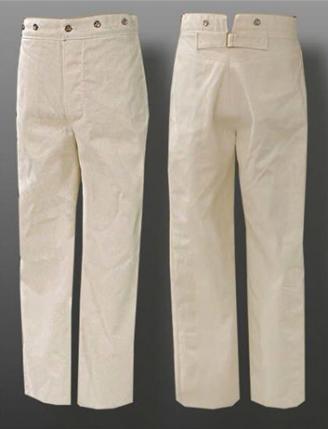 The Victorian Era identifies with the reign of Queen Victoria in England from 1837 to 1901, and civilians during the devastating Civil War times continued the fashion trend. This included fancy top hats, knee-length frock coats in a wide range of shades, vests, and trousers. Often they would stride with walking sticks while dapper pocket watches hung from front vest pockets.

Whether traveling by foot or horse, a newspaper correspondent or newsboy had an important job of delivering word of strife or battle. Typically you could catch these young lads wearing a button down shirt, either a vest or suspenders, a tie or bow tie, patterned, knee-length knickerbockers, wool stockings, and a cap. 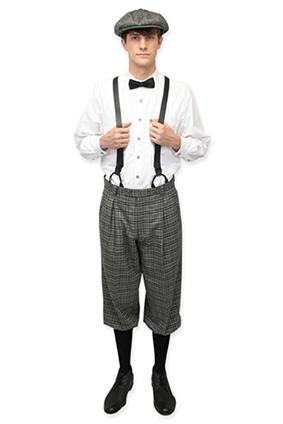 From infamous hoop skirts to simple frocks to practical pioneer gear, women's fashion in the 1860's trying decade depended upon social status and location. There was the prim-and-proper elite of the North and plantation belles of the South, the brave female nurses, and the hard-working pioneer ladies, all decked out in very different styles that have shaped fashion trends of the future.

A southern belle, derived from the French word belle (beautiful), is a quintessence for a young woman of the American Deep South's upper class. Covered from head to toe, this extravagant costume entails a multitude of layers.

The first layer is the bloomers.

Additionally, a variety of accessories were utilized by these well-mannered, flirtatious yet chaste ladies of the civil war period including wide-brimmed straw hat, gloves, parasol umbrellas, and hand fans.

Back in 1861, Dorothea Dix became superintendent of nurses for the North's side of the Civil War. One on her duties was to figure out a consistent dress code for the nursing staff. A couple requirements were that the nurses be over age 30 and plain-looking. Dresses had to be either brown or black and unadorned - no hoop skirts, bows, or ruffles to go with the popular 1860's trend. This resulted in a plain dress with no defined waist covered by a white apron, along with a simple hat to keep hair out of their face.

Although luxurious styles of silks and bustles were left behind, traveling by wagon train or foot required these courageous ladies to take on a different type of ensemble. Hemlines were raised a bit to save them from dirt and wear. A corset was impractical thus often not worn, excluding formal occasions. For this same reason, bodices and sleeves were fitted less closely and an apron was often worn to protect the dress underneath. A bonnet or wide-brimmed hat was worn while outside to protect the face and neck from the sun. 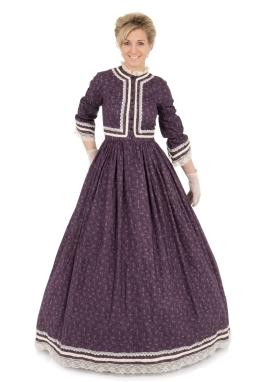 Whether you need a Civil War costume for a theme party, theater production, or re-enactment, you must first decide what you want to dress up as. From there, you must pick the right pattern for your blast-from-the-past getup.

Civil War soldiers wore similar uniforms, the main difference being the color. First decide whether you are dressing up as a Northern Union soldier who predominately wore navy blue or a Southern Confederate soldier who wore grey or light blue.

The guidelines of 1860s dress were very strict. Keep in mind a lady never showed anything below her collarbone before five o'clock PM, a hat or bonnet was always worn outdoors, gloves were never removed (unless eating), and sleeves always went to the wrist. And of course, simply think layers. 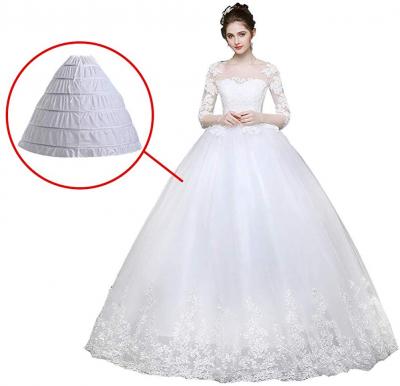 Civil War costumes are an essential part of a re-enactor's repertoire. With the wide array of incredible sources, shops, and sites for your Civil War-inspired outfit, you are certain to create a relatively realistic, attractive, and inexpensive costume that will make you the talk of your special occasion.