The uniforms of the British soldiers during the Revolutionary War were so iconic that they inspired the nickname "Red Coats." While the uniforms of the American Patriots were haphazard and inconsistent, the British military were well-funded and equipped and had distinctive uniforms for each type of soldier. If you're planning a history lesson, play, or reenactment, you can find the elements you need to reconstruct this important outfit.

According to AmericanRevolution.org, most British foot soldiers wore a uniform consisting of the following elements.

The British soldiers wore a distinctive hat called a bicorne or "cocked hat." Made of black wool felt or fur, it had two points to channel rain away from the face and body.

Finding this type of hat for purchase can be a challenge, but CockedHats.com can make one for you to your specifications. You can choose the size and decorations, as well as whether you want your hat hand sewn or machine sewn. Prices start at about $125. 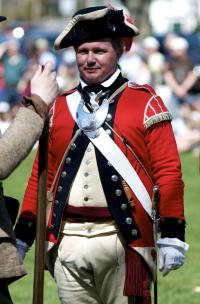 Perhaps the most important part of the British uniform was the red coat. The exact style of the coat varied depending on whether the soldier was light infantry, a grenadier, or played another role. However, they were almost always made of high quality red wool and trimmed in wool and linen. The color of the facings on the coat varied with the regiment, and the style could also vary slightly depending on the role.

The Sons of the American Revolution of California has extensive information about the specific colors used in uniforms, including the following:

You can purchase an authentic British officer coat from G. Gedney Godwin, Inc. The wool coat has your choice of linen or wool turnbacks, or the pinned-back sections on the tails. It retails for about $580.

Each soldier wore a fitted waistcoat, or vest, beneath his jacket. Often, these waistcoats were red, but they could also be other colors depending on the regiment. Some also wore white, buff, or dark blue.

You can find a basic Revolutionary War waistcoat pattern designed to go with British regimentals at The Quartermaster General. The pattern requires a moderate level of sewing experience and retails for $12.

Alternatively, you can buy an authentic Revolutionary War-style waistcoat from American Heritage Clothing. It comes in the color and size you specify and is crafted from linen or cotton and costs about $90. 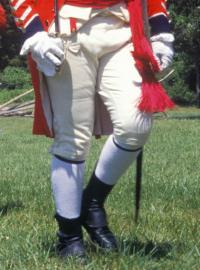 On the bottom, the British soldier wore slim-fitting white or buff breeches that ended in a buttoned cuff just below the knee. They would pair these with white stockings.

You can purchase fall-front knee breaches from Jas Townsend and Son, Inc. They are constructed from durable off-white canvas and made to fit your measurements. They retail for $90.

In many respects, the officers of the British Army wore the same things as the enlisted soldiers. However, there were some important variations. 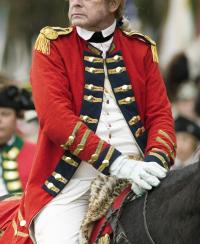 Officer's coats were also red, but they were heavily decorated with gold braid and gold buttons. They often included gold-fringed epaulets.

You can purchase an authentic replica of an officer's coat at American Heritage Costumes. It is crafted in high quality wool and features gold buttons and gold braids. If you are a reenactor, you can have it custom designed to match your regiment. This coat retails for about $625.

Most officers also wore sashes. These long strips of cloth often had fringed ends. The sashes were usually red, but they could feature other colors, such as black, white or gold. In addition to their decorative function, these sashes could act as a stretcher to help transport a wounded officer off the battlefield. 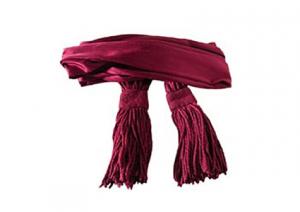 At G. Gedney Godwin, Inc., you can purchase an authentic sash made according to one owned by George Washington. It has seven-inch-long tassels on the ends and retails for just under $100.

Officers also wore gorgets, or gold metal plates, that hung on the front of their coats. These gorgets frequently included engraved details about the regiment.

You can purchase a blank gorget to have custom engraved with the details you wish. Crazy Crow Trading Post has several options, each of which retails for about $30.

The uniform of the British soldiers during the Revolutionary War was distinctive, and it's an important part of American history. No reenactment or play about the American Revolution is complete without these iconic outfits.