Vampire costumes provide a traditional option with enough modern variations for any taste.

A vampire is a mythical creature that feeds on the blood of humans. They hold a certain dark allure. As portrayed in film and literature, vampires are often aristocratic, charismatic, and sexy. While most people save vampire costumes for Halloween night, some wear them at dance clubs or while role-playing vampire characters in games from White Wolf or while participating in a LARP (live-action role-playing game). There are even some people who view themselves as true vampires. For them, wearing vampire clothing isn't a costume choice, it's a lifestyle.

Perhaps because they roam the night, vampires and zombies are typically associated with the color black. Deep, dark red, reminiscent of blood, is also popular for accents, like the lining of a cape. Gothic style prevails in vampire clothing, with old-fashioned suits for men and long dresses for women. Traditional vampires, as featured in Dracula, will usually wear a black cape. Some vampire outfits draw on the more modern look of the "goth" subculture.

Vampire costumes and accessories are everywhere, from twenty-five cent fangs at your local drugstore to elegant rentals. You can get a taste of the vampire selection by visiting the following online retailers: 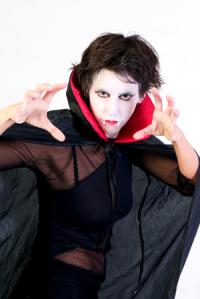 In many stories, vampires look just like every other human, except for their fangs. In this sense, the lazy party-goer could put on a pair of fake fangs and call it a vampire costume. Fangs have come a long way from the cheap, plastic fangs most people remember from childhood. Pointed teeth made from actual denture material can add the perfect touch of authenticity to any costume. Even though all vampires have fangs, you should be aware of the potential problems before adding them to a costume. They can be uncomfortable and impede important processes like eating, drinking, and talking. Wearing improperly fitted prosthetics or wearing fake fangs too frequently also holds the potential to damage your own teeth.

Fake blood gives you that "just-feasted" look. Capsules allow you to impress other trick-or-treaters with your ability to drip blood on command. You can also make your own blood at home. While fake blood isn't toxic, putting any blood-like substance in your mouth isn't for the squeamish, so you may want to question just how committed you are to the authenticity of your costume before buying a tube.

Make-up isn't required to dress as a vampire, but you can cover your face in white or grey for a suitably undead pallor. Kits can help you blend colors for more realistic coloring.

When looking for costume ideas, you can draw inspiration from the numerous vampires featured in movies and television shows: