Superhero costumes have long been a favorite of people of all ages and both genders. The lure of supernatural abilities and uncanny strength know no bounds. Halloween and costume parties offer a fun opportunity to explore -- and expose -- the inner hero.

While Batman, Superman, Wonder Woman, the Power Rangers, and Spider-Man are the most popular, there are many other powerful costumes available.

Whether you loved them in the comic books or on the big screen, you can dress as Daredevil and Elektra. Daredevil's costume usually consists of a red muscle top and mask, while Elektra wears a sexy mini dress. Daredevil's costume is available at AliExpress, while you can pick up an Elektra costume at Amazon.

Mr. Fantastic, Invisible Woman, Human Torch, and the Thing are the Fantastic Four. Another set of superhero costumes inspired by comic books and the movies, the Fantastic Four are the perfect choice for a group. You can find these costumes at many retailers, including DHGate Online. 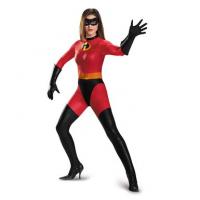 The Incredibles was the Disney Pixar hit of 2004. Featuring a family of animated superheroes, the movie spawned many toys, books, video games... and costumes. Costumes available include:

The X-Men have lived in the comic book world since 1963, but it was their 2000 movie that catapulted the superhero mutant team into costume popularity. Today, costumes representing Wolverine, Cyclops, the Beast, Magneto, and Storm are available at many outlets, including:

If you need more inspiration for your superhero costume, consider:

Buy Superhero Costumes has a great selection of superhero costumes for adults.

Make Your Own Superhero Costume

If you prefer a more unique look, you can create your own superhero costume. Simply choose your color scheme and name. You'll also want to think of your special power as this will help in choosing accessories and staying in character.

Next, find clothing of the chosen color in a tight, shiny material such as lycra or spandex. Clothing can be as simple as tights or a mini skirt with a sports bra or tank top. If you choose, you can also create a simple logo for your costume. This can be made with fabric paint or made separately and then sewn on.

Of course, you will also want a cape. These are available at costume shops. Add accessories depending on your superhero's character. Some possibilities include: