The Samba is a high-energy, exciting style of dance, and the costumes are reflective of this energy. Costumes typically expose dancers' torsos, legs, arms,and shoulders. This not only complements the dramatic and intense Samba dance, but also serves a functional purpose in preventing dancers from becoming overheated. Samba costumes are often elaborate and utilize bold, vibrant colors. Accents and embellishments are key, and may consist of sequins, rhinestones, beads or faux jewels, metallic shimmer, floral pieces, fringe, and feathers. Costumes may be very unique and complex, and designers of Samba apparel are well-respected.

The Samba apparel designed for professional and parade use is often elaborate and very high-quality. Top designers take care in creating their designs to create back pieces and other costume elements that are as comfortable as possible for the performers. Costumes may be purchased or rented from a variety of retailers.

Like the dance itself, the costumes are dramatic and attention-grabbing. Costume styles vary. Types of costumes include: 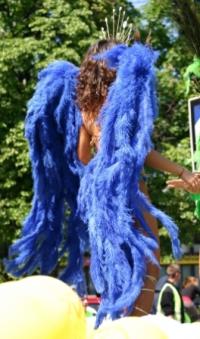 Where to Buy Samba Performance Costumes

Dancers and performers can purchase or rent costumes from Samba dance retailers, samba schools, dance costume catalogs, and other venues such as the following:

Even those who aren't professional Samba dancers might be inspired by the confident and colorful dancers. Getting dressed up as a Samba dancer for Halloween, a costume party, celebration of the Brazilian Carniva, or Mardi Gras can be fun and exciting. There are sexy and modest version of children's Samba costumes available for those who want to sport the look for a special occasion. Dress-up style Samba outfits are much more affordable than professional costumes, but they are not designed to stand up to repeated or extensive wear. You can purchase these at Halloween costume retailers and select costume shops.

Where to Buy Dress-Up Samba Costumes

Samba costumes are eye-catching, sexy, and functional for those who perform the dance professionally, in competitions, or for fun. They're also a popular choice for those who make appearances in Carnival parades, as well as for costume parties. No matter why you decided to get a Samba costume, you're sure to have fun and look great while wearing it.