Renaissance festivals includes authentic Renaissance-era food, theatrical performances, and shopping, as well as other events typical of this period. People who work at the festival are usually required to wear traditional Renaissance costumes so that they look authentic. It's not unusual for visitors to these festivals to also dress in costumes. People who attend in costumes often do so because they enjoy recreating the looks from the period.

During the Renaissance period, a stranger could easily tell the social status of any person by looking at his or her clothing. The wealthy wore clothing made out of the nicest fabrics and dyed the deepest, richest colors. Fabrics worn at the time were:

The fabric colors that were most exquisite were purple and crimson. Purple was only to be worn by the Queen. Those looking for authentic costume colors consider those done in earthy tones such as:

There are several options to consider as a Renaissance costume. You can either purchase a costume at a store or site online or make one by hand using a pattern and sewing instructions. 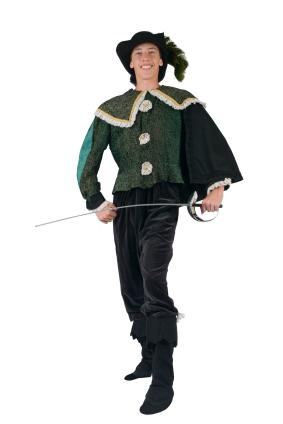 A typical Renaissance costume for a man includes the following:

If you want to make your own costume, Simplicity's Renaissance Collection includes a pattern that features a basic men's costume design that can be done in two variations. For those looking for a pre-made costume, check out Renaissance Faire Costumes at Fantasy Costume Company's website. The site offers full costumes as well as basics such as pants and shirts.

A basic costume for a woman includes the following:

Jo-Ann Fabrics & Crafts features the Simplicity Woman's Renaissance pattern that can be created at home. For those wanting something already made, check out Fantasy Costume Company's selection of Renaissance bodices, chemises, skirts and more. 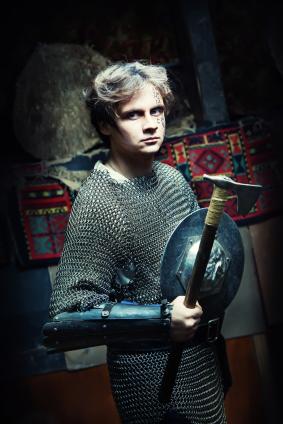 The knight in shining armor may come from a time period well before Henry VIII, but it fits right in with the medieval time period and the popular sport of jousting. Knights may choose to dress in anything from plate armor (although depending on the heat of a particular region, this may be very uncomfortable) to chain mail to simple leathers.

Knight costumes can be purchased at Renaissance Faires as well as at an online site such as Renaissance Costumes Clothing.

Pirates are a popular sight at traveling faires as both players and visitors. While the film Pirates of the Caribbean is set some time after these medieval events, the themes of pirating and privateering are very much in keeping with the times. Pirates can look as fancy as Jack Sparrow or as dirty as a street beggar depending on your taste in costumes and clothing. Pirate costumes can easily be found at costume stores such as Costumes 4 Less and Annie's Costumes.

To complete the look of a Renaissance costume, you will need to only add a few accessories. Hats are very important and shoes must be worn to make the costume look authentic. Women during the Renaissance era did not wear very much make-up, nor did they wear jewelry, so keep those items at a minimum for the most authentic look.

Join In On The Fun

There are many Renaissance costume ideas that can help you become the character of your dreams. Whether you are a valiant knight or a lady of the Renaissance, there is a costume to fit your needs. Let your imagination soar and take up a costume and a character for a day and join in on the fun that a Renaissance faire can offer.