Purim is one of the most joyful Jewish holidays, and wearing Purim costumes just adds to the fun. Here is some advice on what to wear, where to find Purim costumes and how to make your own.

Purim is a Jewish holiday celebrating the salvation of the Jewish people living in Persia. The story is told in the book of Esther. Esther was a Jewish woman who became the queen of the king of Persia, though he did not know she was a Jew.

The king's advisor, Haman, did not like Esther's cousin, Mordecai, because Mordicai refused to bow to Haman. The king allowed Haman to do what he wanted with the Jews, and his plan was to exterminate them.

Mordicai urged Esther to tell the king of Haman's plan. This was very dangerous for her, because anyone who appeared before the king without being summoned could be killed. She finally went to him after fasting for three days, and was received. Esther told the king of the plot against the Jews and they were saved. Haman was hanged. Purim is celebrated during the Jewish month of Adar, which usually falls in March. It is preceded by a fast from sunrise to sunset to commemorate Esther's fast. On Purim, which means "lots" because of the lottery Haman used to choose the day of the massacre, the book of Esther is read and great celebrations and feasts take place.

The readings can get quite rowdy as the people listening to the reading are encouraged to boo, hiss, stamp their feet or make other noise whenever Haman is mentioned. There are often plays associated with Purim, thus the need for Purim costumes. Some even call Purim the Jewish Mardi Gras. 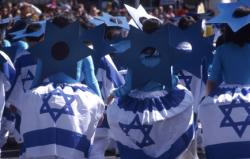 The most popular Purim costumes are those portraying the main characters of the story: King Achashverosh, Queen Vashti (whose refusal to appear at the king's banquet led to Esther becoming queen), Esther, Haman and Mordecai. The costumes of the king and queen look a lot like Halloween king and queen costumes. The boys usually wear crowns and colored capes, while the girls may wear similar outfits or simple colorful robes and tiaras. Sometimes they are dressed like princesses.

Esther is usually dressed in a simple purple robe with a tiara. Haman is often dressed like a shephard, while Vashti's costumes are toga-like, reminiscent of Cleopatra. Other costume possibilities include traditional Jewish outfits, Torah scrolls, colorful robes and costumes incorporating the Star of David.

Purim Costumes are a pretty specialized niche, but there are several sources online for costumes and accessories. Here are a few to get you started:

When you're shopping for Purim costumes, don't forget the accessories. Graggers, which are noisemakers used to drown out Haman's name during the reading of the book of Esther, are must-haves for Purim.

Making Your Own Costumes

Because many Purim costumes are variations on robes or togas, it is easy to make your own costumes from old sheets. A king costume can be made simply by making a crown and a cape, or repurposing an old cape.

Tiaras are a must for all the little Esthers, but a tiara or crown can be purchased inexpensively and added to a homemade costume.

You can also make your own gragger by filling a cardboard paper towel tube with beans and covering the ends with waxed paper or heavy construction paper. Decorate and shake.

Purim is a holiday that is made for celebration and fun. Adding Purim costumes to the mix makes it even more festive without taking away from the religious significance of the holiday.