Men's Pirates of the Caribbean Costumes

Possibilities for men include both heroes and villains: 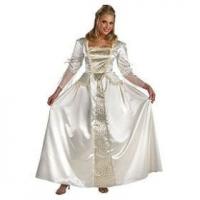 Women's characters are a bit more limited, but still offer some interesting possibilities:

"Pirates" is all about period costume. While the story itself is set in the late 1600s, the costumes are a mix of 17th and 18th-century dress, with some elements of fantasy thrown in for good measure. While the historical inconsistencies make it difficult to pin down a specific era, they make for a great movie. Jack Sparrow's dreadlocks and beaded beard are completely fantasy, while the powdered wigs are rooted in history. The corseted figures of the ladies are perfectly in period, as brassieres were not invented until the late 1800s or early 1900s.

If you're planning to be a pirate, go ragged. And dirty. If you are planning to be a gentleman, get ready to wear tights. Men of this period wore knee-length breeches with opaque tights; square-toed, slightly heeled, buckle-ornamented shoes; and some sort of hat, usually a tri-cornered style. Gentlemen wore powdered wigs and carried swords or matched pistols. It was not uncommon for gentlemen of the aristocracy to wear lace.

Ladies of the time were tightly laced in figure-shaping corsets that restricted their breathing but gave them the requisite conical figure. The feminine ideal was wide shoulders, a swelling bustline, and a narrow waist; the hips were narrower than the shoulders, and were harder to distinguish because of the voluminous skirts of the ladies' dresses. Their outfits included silk, lace, velvet, and lots of jewels. Hair was worn long and some form of hat was required for outdoors. Fans and handkerchiefs were common accessories. Shoes were generally high-buttoned "granny boots." Lower-class women, like prostitutes and serving wenches, would wear peasant-type blouses with bodices that accentuated the bustline, similar to an underbust corset or tightly fitted vest.

Finding a Pirates of the Caribbean Costume 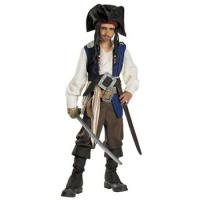 Most of the clothing and accessories needed for an authentic-looking Pirates of the Caribbean costume are uncommon enough that your best bet is a costume shop or rental establishment. Many online costumiers have "Pirates" costumes, including both the "Redcoats," the upper-class gentlemen, and some rather incredible renditions of Davy Jones. For ladies' wear, any costume shop will have appropriate dresses that replicate the styles of the period. In addition, re-enactment societies can provide instructions for making both men's and women's 17th and 18th-century clothing.

0
Comments
© 2006-2021 LoveToKnow, Corp., except where otherwise noted. All Rights Reserved.
Pirates of the Caribbean Costume