As far as James Bond costume ideas are concerned, older is definitely better. That is to say, the older movies will yield wilder costumes. There is no end of fun costumes for couples or groups to choose from in over 20 films.

If you're going to dress up as the world's most suave secret agent, the most obvious costume is a tuxedo. Your prop gun should really be kept hidden, but then you run the risk of no one knowing who you are meant to be. Bond requires more than just the tux; you also need the British accent and the introduction: "Bond, James Bond" to pull it off.

James Bond is well known for his various attire. If you want a costume that is fun and unique, try one of the following ideas:

Finish any Bond outfit with the proper accessories. This means a stylish watch, gun and whatever other gadgets you may have on hand.

A simple group costume could consist of the MI6 team: Bond, M, Moneypenny and Q. The clothes are fairly easy, as everyone just wears suits:

The other obvious idea for a James Bond costume is for a couple: Bond and a standard Bond girl. The Bond girls got tougher over the years, but it's the rare film that doesn't feature a woman in a bikini. She may still carry a gun, but she's in a bikini. If you really want to change things up, the woman can wear the suit and the man can wear the bikini and you can be Bizarro Bond.

Although some of Bond's tuxes in the 1970s are a bit overly memorable, it's really the villains who wear distinctive outfits. For example:

You just can't talk about James Bond costume ideas without talking about the Bond girls. While the bikinis abound (the white bikini worn by Ursula Andress in Dr. No remains one of the most iconic costumes in film history), popular "girls" have worn all sorts of memorable costumes. Some famous bond girls looks include: 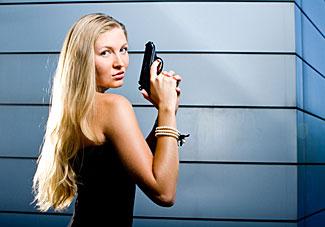 Although the Bond movies have always been action thrillers, they have provided some good laughs as well. Not least are some of 007's disguises, which can yield some fun James Bond costume ideas. More than once has he appeared in scuba gear, only to strip it off and reveal an evening suit underneath. While this look can be a bit warm, you can wear a scuba mask and fins with your suit for a funny and recognizable costume.