Pirate costumes can be elaborate or simple depending on a person's time, budget and talent. You can buy a number of different costumes, but if you want one that is customized to a specific color scheme or size, consider making a pirate costume yourself.

Use a Pirate Costume Pattern

Sew a pirate costume from a pattern and customize the fabric and color choices.

Go to your local fabric store and look through pattern books for ideas on costumes or check out these options.

Whether the man wants to go as a tattered deck hand pirate or a fancy captain, there is a pattern for him:

Even the smallest of infants can be dressed up as a pirate. Make one of the following cute costumes from a pattern: 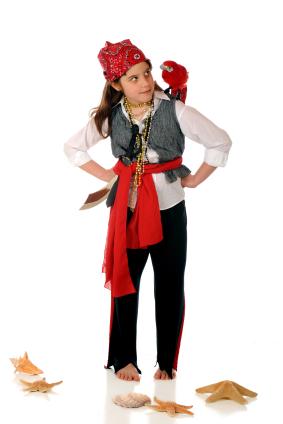 Add some accessories to your outfit to create the perfect look

The captain was the head of the ship, the man behind the wheel, and the guy who wore his booty all over his person. The captain did not have to be refined as much as cunning and ruthless. Note that women can also be pirate captains! 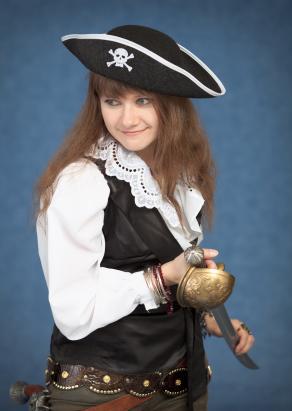 Do not wear a formfitting top for the costume. You can look at local thrift stores and costume shops for a tuxedo shirt (especially after Halloween when everything goes on sale). If you can't find a tuxedo shirt, wear a man's white dress shirt. Here's how:

Knee breeches were often worn by the refined pirate captain:

The standard tricorn was the hat of choice for most pirates. A tricorn looks like a triangle when placed on the head. You can purchase an appropriate hat at a low cost from a costume shop or dollar store. 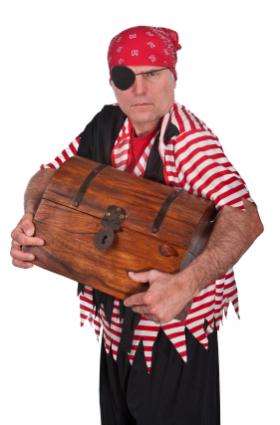 The scalawag was the deckhand, the cannon loader and the one in the crow's nest. He was dirty, messy and disheveled with a mean spirit. Unlike a captain. a deckhand was not concerned with looking in charge.

Place a large bandanna over the head and tie it in back.

Scuff and discolor some shoes by rubbing them in dirt. If there are no safety concerns and the weather permits, you could also go barefoot. 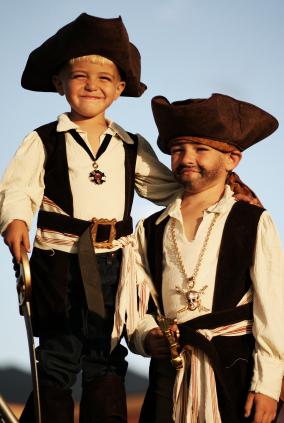 Those who wish to be a captain but prefer to be rougher around the edges should wear long pants and high boots or breeches and loafers. A dirtied leather tricorn hat over felt laced with gold trim, and a long pirate trench over a waistcoat are good additions. The color scheme is unimportant, but should be somewhat flashy without being tacky. An optional overlay piece is the pirate coat that is long with bell sleeves and a split back.

Tie a small bandana around his head and people will know immediately he is a pirate baby. Toddlers and children can be dressed up in tattered clothing.

There are many fun accessories that can complete any pirate costume:

Inspiration from the Screen

One good way to get an understanding of what a pirate wears is to watch movies and specials about them. Rent movies like Pirates of the Caribbean starring Johnny Depp as Captain Jack or Cutthroat Island starring Geena Davis. Films like Treasure Island also offer much historical merit. From these films you can get an idea of the clothing you can wear and how you could modify things you find to fit the bill.