Elvis costumes celebrate an American rock and roll icon and give everyone a chance to be a star. Whether you're a fan of Early Elvis, or you know him best from his Vegas days, you'll find plenty of costumes to turn you into a Hunka Hunka Burnin' Love.

Elvis Through The Years

Those wearing Elvis costumes must first decide which era of Elvis they want to emulate.

This was Elvis in his hip-shaking, heart-breaking glory. Elvis often wore a casual suit with a button-up shirt underneath. Leave the collar of the shirt unbuttoned to show your carefree attitude.

A popular look from Elvis's early years is the outfit he wore in Jailhouse Rock. This modified prison uniform consisted of a shirt with large black-and-white stripes, black pants, and a black button-up jacket with a prisoner number on the front. The jacket and pants featured prominent white stitching, giving it a low-budget look. You can add white stitches to black fabric by drawing dashes with a white sewing pencil or chalk. Just be careful not to rub your hands across the lines.

You can also purchase an early years Elvis costume such as:

After several years of dwindling popularity, Elvis returned to the public consciousness with a highly successful television special. This version of Elvis was all about black leather. Wear black leather pants and a black motorcycle jacket to become mid-career Elvis.

Bring on the flashy jump suits and gold jewelry. Dark sunglasses? Rhinestones? Fringe? Flared legs? A cape? When it comes to putting together a costume worthy of a Vegas performance, the tackier, the better. With a little ingenuity, you could piece together a jumpsuit by modifying the legs, neckline, and collar of a pair of coveralls and adding decorative elements. Unless you're adept at sewing, this is probably a costume you should purchase.

Consider options such as:

Early Elvis sported a slick pompadour with sideburns. To recreate the look, you'll need hair gel and a comb to shape your hair. In later years, he maintained the basic pompadour shape, but added volume; the sideburns also became more prominent. Try teasing your hair to reach the appropriate volume, and use large amounts of hair spray to hold it in place. 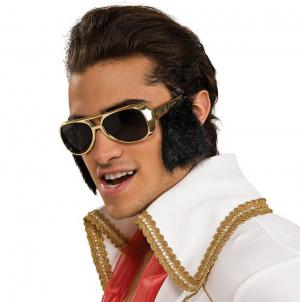 With so many different Elvis costumes to choose from, you'll have no trouble finding the incarnation of the King that suits you best. Try on any of these Elvis costumes for size and help his legend live on.