Which Character Should I Be?

The hardest part of buying Disney Halloween costumes is deciding what character you want to be. Since Disney has been making movies since the 1920s, there are hundreds of Disney character costumes for you to choose from.

If you're searching for an outfit for a little boy, the selection of Disney Halloween costumes includes heroes like Toy Story's Woody and Buzz Lightyear as well as costumes to represent the entire cast of the movie Cars. The new hit movie Ratatouille will likely inspire many costumes, too. If you're looking for a classic costume, popular choices for boys include Peter Pan, Mickey Mouse, and Prince Charming.

Popular Disney Halloween costumes for little girls include princesses such Snow White and Cinderella, as well as classic Disney characters like Minnie Mouse and Daisy Duck. For preteen girls, Hannah Montana promises to be one of the most popular Halloween costumes this year. 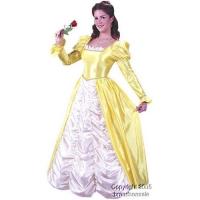 It's never too late for happily ever after.

If you're looking for a gender-neutral costume for your child, check out characters like Winnie the Pooh, Eeyore, Tigger, and Piglet. Characters from Disney's Baby Einstein line are also quite popular Halloween costume choices for infants and toddlers.

If you're attending a Halloween party with your significant other, you may want to look into Disney costumes for couples. Popular choices include Donald and Daisy Duck, Mickey and Minnie Mouse, Mr. and Mrs. Incredible, and Sally and Jack Skellington from Disney's The Nightmare Before Christmas.

If you want to celebrate Halloween with your four-legged friend, you can even find Disney Halloween costumes made just for pets. While the selection isn't nearly as large as you might hope, it's not too difficult to find Mickey Mouse, Minnie Mouse, Tinkerbell, Snow White, Tigger, and Goofy costumes for cats and dogs.

If you can't find the outfit you need at your local costume shop, check out the following online retailers:

Disney Costumes on a Budget

If you're on a tight budget, there's no need to give up your plan to wear a Disney Halloween costume. The following tips can help you get the costume you want at a price you can afford: