Disney costumes are always popular, and the wonderful world of Disney offers a plethora of choices for year-round costume wear, whether the occasion is Halloween, a costume party, or just little-girl dress-up fun. While there are many Disney character costumes available for purchase, it is also possible, with a bit of creativity, to make your own Disney-inspired costume.

Is It the Real Thing?

Before purchasing any costume that purports to be "Disney," it is wise to check for authenticity. The best way to do this is to check the tags for the Disney logo. Real Disney products will display the logo clearly; if you are buying from a website, take the time to ensure that the site has the Disney logo and that it is the same as the logo shown on the Disney site. 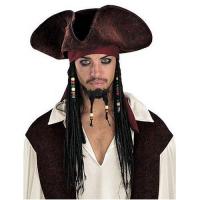 You can be Jack Sparrow!

What good story would be complete without the beautiful heroine, who wins the heart of the hero and inspires him to great and courageous deeds? Little girls love dressing up as their favourite Disney character. First, there are the Disney Princesses: Ariel (The Little Mermaid), Pocahontas, Aurora (Sleeping Beauty), Snow White, Mia (The Princess Diaries), Cinderella, Jasmine (Aladdin), and Mulan.

There are the not-so-royal, but always enchanting heroines as well: Lucy Pevensie (The Chronicles of Narnia), Jessie (Toy Story 2), Wendy (Peter Pan), Miss Bianca (The Rescuers), Violet (The Incredibles), Alice in Wonderland, Lilo (Lilo and Stitch), Tinkerbell (Peter Pan), Esmeralda (The Hunchback of Notre Dame), Belle (Beauty and the Beast).

Oddly enough, the little girls don't seem to want to dress up as non-human characters, even such beloved ones as Dory (Finding Nemo) or Minnie Mouse.

For those who like to walk on the dark side, there are plenty of Disney villains to choose from, both male and female. Who can resist the impulse to try out Maleficent (Sleeping Beauty) or the Wicked Queen from Snow White? For the boys, there is the ever-popular Captain Hook (Peter Pan) or Jafar (Aladdin). Other popular villains include Barbossa and Davy Jones (Pirates of the Caribbean), Randall (Monsters, Inc.), Prince John (Robin Hood), The Queen of Hearts (Alice in Wonderland), Yzma (The Emperor's New Groove), Gaston (Beauty and the Beast), Jadis the White Witch (The Chronicles of Narnia), Lady Tremaine (the Wicked Stepmother, Cinderella), and Cruella de Ville (101 Dalmatians).

Where to Buy Them

Any good costumers will have plenty of Disney costumes to choose from. Online sources include Oriental Trading Company and ToysRUs. For authentic Disney costumes online, the best bet is DisneyShopping.com, which has the newest releases and official Disney items. Disney shopping also has some of the harder-to-find costumes, including small sizes for infants and toddlers.

The creative person may wish to make a Disney-themed costume. Some patterns are available in local fabric and sewing stores. Or you can assemble a good "knock-off" of some of the characters by studying their basic look and improvising. Makeup, acessories, and one or two specific details (the puffed sleeves of Snow White's dress, for example) can go a long way toward making a costume seem to be what it is "supposed" to be. After all, if you've got the squid-like face of Davy Jones, who's going to notice your pants?