Cleopatra costumes are the ultimate way to feel like (and dress like) a goddess. Whether for Halloween, a masquerade ball or any costume party at any time of the year, Cleopatra outfits are always a big hit.

Cleopatra ruled Egypt, beginning when she was just 18 years old. She was supposed to share power with her younger brother, who was also her husband, but she had no intention of doing so. When she fled the country, Julius Caesar seized power until Cleopatra returned and became his lover.

After Caesar was killed, Mark Antony visited Egypt and was also taken with the legendary beauty. They eventually married by an Egyptian rite, and she bore him four children. He killed himself after hearing untrue reports that she was dead, and she killed herself a few days later.

Cleopatra has fascinated people ever since, probably because of the combination of her great beauty and power of seduction, along with the political power that she was able to wield alone and with the help of her two lovers. Who wouldn't want to dress like this famous beauty?

Cleopatra outfits usually start with a toga, which is a white dress or robe. Togas can be loose or more form-fitting, giving you just the right sexy look for your style. You'll also find Cleopatra outfits in black, gold and other colors.

Some Cleopatra costumes play up the Egyptian part of Cleopatra's story by adding different colors of flowing fabric or gold colored cuffs, collars and belts that give a more Egyptian flare to the outfit.

The accessories are what really make a Cleopatra outfit shine. A popular addition is a headpiece, often with beaded strands hanging down over the hair. Many costumes also include or have available for purchase an asp that can be wrapped around the arm, playing up the story that Cleopatra killed herself with a poisoned asp.

Finish the costume off with plain sandals or some sexy gold high heels if you're going for a fancier look. Consider wearing thick gold chains and a number of gold bangle as well.

Because many Cleopatra costumes start with a toga, you can easily make a costume yourself. Start with a big white sheet or length of fabric and tie it into a toga shape.

Decide on the accessories you want. Many belts and headdresses can be made of cardboard or felt, or you could purchase a great accessory or two to really make your homemade costume shine. Again, add sandals or heels and you'll be ready to party like the Egyptians! 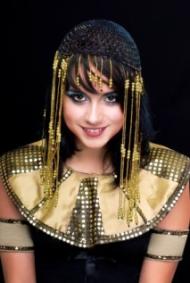 Most costume stores carry Cleopatra costumes, and at Halloween you'll likely be able to find costumes to rent. At other times of the year, you'll probably have to buy your costume online. Most costumes run in the $30 to $40 range, but you could end up spending a lot more if you want a lot of accessories. Here are some places to look:

Of course you can't just wear a Cleopatra costume and not act the part. Remember, you're a queen! Some of the most powerful men in the world were seduced by you. You can't just take your everyday attitude to the party. Walk tall, flirt a little more than normal, get people to wait on you; it's all part of the fun. Being Cleopatra would be a great couples costume if your sweetie will dress up as Caesar or Antony. You could also have a whole entourage for a fun group theme. Is there anything better than getting to be queen for a day?