Have you wondered who is behind the beautiful antebellum costumes worn by the Azalea Trail Maids who represent the city of Mobile, Alabama? Susan Finizola, a professional dressmaker who creates a number of these gorgeous costumes each year, shared her insight with LoveToKnow Costumes General Editor Mary White.

How are Azalea Trail Maids chosen?

Each year, hundreds of high school juniors in Mobile County, Alabama, try out for the opportunity to represent the city as a Trail Maid. Each high school has the first level of competition, from which 100 candidates are chosen to try out at countywide interviews. Ultimately, 50 girls are chosen to represent the city of Mobile, Alabama, as ambassadors. The program is overseen by the Jaycees organization.

What happens once the selection is made?

Once the Maids are chosen, the next step is to create each girl's costume. The colors are baby maize, petal peach, baby blue, light orchid, light aqua and the queen wears a baby pink dress. During the application process, each girl submits her three top dress color choices to the Jaycees, who ultimately make the decision about which color each Maid wears.

Each girl secures a dressmaker to construct her attire. Since there are 50 Maids, 10 girls will wear each of the five colors. One of the girls is named Azalea Trail Queen at a reception in early December, and her dress will be pink. A few days after the queen is announced, the fabric will be distributed and the dressmaking process begins.

What are the distinguishing characteristics of the Azalea Trail costumes? 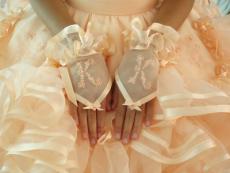 These dresses are a representation of antebellum style but are not intended to be authentic. They are sewn from polyester fabric and poly/satin ribbon. Many people say the Maids conjure up an image of a Southern garden party in the spring 100 years ago.

The costume is an off the shoulder fitted bodice and a full skirt over a steel ring enforced hoop. Each Trail Maid must have two pair of pantaloons (similar to ankle-length pajamas), two pairs of gauntlets (gloves without fingers), and a cape. Covers for a wire hat frame and parasol frame are constructed to complete the attire.

There are specific guidelines for the dresses. For example, the bottom edge of the finished dress must be four inches off the floor. Additionally, ruffles on the edge of the hat, the edge of the parasol and the ruffle around the shoulders are mandatory. Monogramming is limited to certain spots, while embroidery embellishments may be on most areas of the attire.

How much fabric and lace is used to make the costumes? 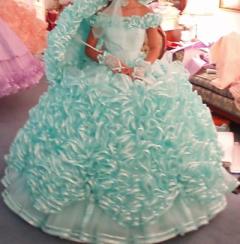 The base supplies the Jaycees order for the construction of each outfit consists of dress fabric, steel for the hoop, fur, a wire frame for the hat, a parasol frame and a dress bag. Dress fabric includes 75 yards of organza and 15 yards of taffeta dyed specifically for the Mobile Azalea Trail. The fabric is dyed in Japan and distributed through Berenstein Textiles of New York. When the Maids are dressed the only visible fabric on the dress, hat, parasol and gauntlets is the organza and taffeta.Ten yards of cotton broadcloth is used for the hoop. The cape is lined with one and a half yards of fur. The Pantaloon fabric is where the personality of each Maid shines. This fabric is purchased by each Maid here in Mobile or by mail order.

In addition to the over 100 yards of fabric that goes into each costume, the dressmaker uses thousands of yards of thread and between 300 and 1,500 yards of ribbon. I also use at least 400 yards of fishing line in the edge of the ruffles. Other supplies include hooks and eyes, zippers, buttons, elastic, interfacing, and many other sewing notions.

Some Maids request lace on their dresses. Usually the amount of lace is about half the amount of ribbon used on the same style of dress.

What do the dresses cost?

Some dressmakers make traditional dresses only, while others are known for being avant garde. In my experience, the complete attire the Maid wears can cost between $3,000 and $6,000. On rare occasions a Maid's relative will construct the attire for free or at a lower price. This can decrease the price to as low as $1,500.

How did you get started making Azalea Trail costumes?

I was involved with the Azalea Trail Organization from 1995 to 1999. In 1999, at the encouragement of a good friend, I began making Azalea Trail dresses. It was a natural progression since I have been sewing and designing for the past 35 years. I also make many other types of dresses and costumes, including Mardi Gras dresses and christening gowns.

What do you enjoy the most about making these dresses? 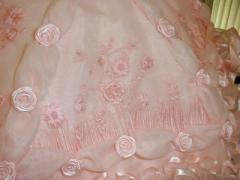 For me, the creativity is the most enjoyable part of making these dresses. I can make a beautiful traditional Azalea Trail dress and have done so in the past. However, I prefer the avant garde style of Trail Dress. I was one of the first (if not the first) to use covered buttons on the costume. Each girl decides independently on her theme. If a Trail Maid has an unconventional idea I will work with her to incorporate it into the dress in a tasteful way. This year two of the five dresses I constructed have seashell motifs. There were other dressmakers who would not let their girls use seashells, but not me.

Each Maid gets so excited about her dress, and that is the second most enjoyable aspect of making these dresses.

Where are the Trail Maids costumes seen?

The Mobile Azalea Trail Maids have become our city's symbol of hospitality. hey often greet visitors at the Mobile airport and are frequently seen at convention doors greeting guests as they arrive. Among other events they have appeared at the GMAC Bowl and the Senior Bowl here in Mobile. Most functions in our city at one time or another ask for Trail Maids to be present. They also travel around the country representing the city of Mobile. As of today they have not traveled outside the U.S. because traveling on a plane, as they did when they appeared in the Rose Bowl Parade one year is very difficult, because each dress weighs about 50 pounds. They now travel by bus to events such as the Macy's Thanksgiving Day Parade and Thanksgiving Parades in Chicago and Philadelphia (rotating each year). They appeared in the Indianapolis 500 Parade in 2008, and also appeared at the race itself. Each spring they participate in the Easter Parade at Walt Disney World.

LoveToKnow Costumes would like to thank professional dressmaker Susan Finizola for taking the time to share her knowledge about Trail Maid dresses, and wishes her continued success as a dressmaker. If you're interested in speaking with Susan about creating a custom costume for you, she can be reached at 251-661-4257 or suesuef (at) bellsouth.net.