Every holiday play needs a few angels, which means you'll need a few angel costumes. There's usually not a whole lot of variety in angel costumes, because we've all been brought up to see them in the same way.

The basic angel costume consists of a white robe, like a graduation robe, or a loose dress almost like the outfit shepherds wear, only in white instead of brown or black.

Such basic costumes usually involve some kind of belt, often a gold rope, and, of course, wings and a halo, either gold or white. These are the kinds of costumes you'd expect from a holiday play with kids in it. They are often homemade and are a classic.

If you're planning to purchase angel costumes, you'll find a somewhat fancier selection these days than you might have in the past. Angel costumes now are often made of satin (or a satiny fabric) that is shiny. They are cut more like dresses than robes, and often have a sexy side. Wings may be the classic butterfly-shaped wings, or they can be fancier, involving faux feathers instead of tinsel.

If you want to go the homemade route for your angel costumes, they are relatively simple to make. The absolutely easiest angel costume, which would also be fine for Halloween, involves a white sweatshirt or leotard, white tights and tutu (or skirt, or sweatpants) and wings. Wings can be cut out of cardboard and covered with glitter. Alternately, you can form the wings out of old hangers and cover with tinsel or white tights stretched over the frame.

If you're dressing a little girl as an angel and she already has a frilly white dress, just add wings (and a halo or crown made of tinsel, if you want) and you're done.

A step up in complexity is that classic robe-like costume. You can make angel costumes out of old sheets, but if you're making them for a crowd, make sure to bleach all the sheets together so all the angels are the same shade of white. Use a graduation robe as a guide, making a roomy dress with wide arms. Or just cut a slit in the sheet so the child's head will fit through, have him or her put it on, and mark a stitching line for the sides and the arms (have them stretch out their arms and leave the arms unfitted). Then you can stitch those lines with your sewing machine.

Add a belt if you need to, as well as wings and a halo. Angels can wear white shoes and sandals and white tights, if desired. 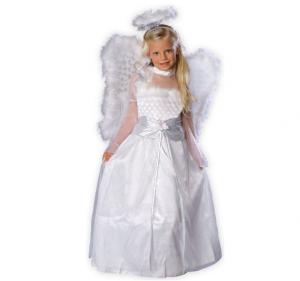 If you'd rather buy your angel costumes, there are many sources that can help, such as:

Expect to pay between $20 and $100 for angel costumes, depending on whether you are looking for a costume for a small child or a fancy costume for an adult. Most costumes come complete with the dress, halo and wings.