For those who like to combine sexy with science-fiction, a Leeloo costume is the perfect choice. There are a few variations of this look, all of which are distinctive. You can purchase a complete Leeloo outfit, but it's easy and inexpensive to make, which is ideal for anyone who is low on time and extra cash.

The Look of a Leeloo Costume

Sci-fi fans know that Leeloo is the Milla Jovavich character from the 1997 cult favorite The Fifth Element. Leeloo had two specific looks in the film. One consisted of metallic beige stretch pants with black stripes on the front, back, and around the knees. This look was paired with a wide black belt. Over a cropped white T-shirt, Leeloo wore very distinctive, rubber, hole-punched orange suspenders that fastened in a V under the groin.

The other costume was white bandages wrapped around the body revealing lots of flesh. The bandages began around the neck and one ran vertically down the torso, while the rest wrapped horizontally around at strategic locations. This bandaged costume was accompanied with white boots.

Leeloo is not a popular enough character to warrant mass production of a Leeloo costume. However, you can purchase the suspender costume at a few specialty outlets.

The online marketplace Etsy only offers the bandage costume, and a very limited supply at that. However, one of the best things about Etsy is that sellers post new merchandise frequently, so you never know what the inventory may be. Another bonus is that the bandage costumes in stock are all under $200.

Three Muses offers the orange suspender costume. As of 2012, the outfit is priced at a little over $200. If you prefer to save some money, you can opt to only buy the suspenders here, which are custom fit and very exact to the film. They are made of vinyl. Rubber would be more accurate, but very difficult to work with, wear and maintain, so don't feel bad about wearing vinyl instead.

The full suspender costume and the bandage costume worn by Leelo can be found at Kropserkel, a specialty site that stocks some of the most well-known costumes from Sci-Fi's biggest hits. They appear to be anticipating new stock for the Leelo look, so keep your eyes peeled out for additional arrivals.

A version of the bandage costume can be found at Artifice Clothing, but be aware that it has been given some cyber-Goth modifications. However, it still looks great and if combined with the wig, will be distinctively Leeloo.

Part of the fun of Comic-con and Cosplay is making your own costume, because everyone is so much more impressed. Both of Leeloo's costumes can be made at a relatively low cost and trouble, depending on your resources and skills. However, most people prefer to purchase the suspenders at one of the above options, because they are so detailed and hard to make. 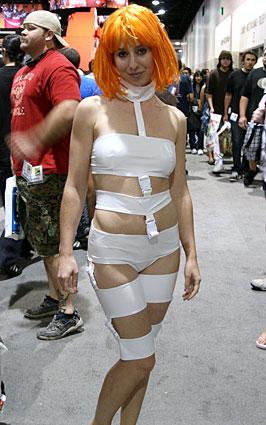 Usually when you're fond of something, you go to great lengths to show your devotion. In this case, it means dressing up as your favorite character from The Fifth Element. Not only does this pay homage to the film and character, it also allows you to step outside your regular box and become someone else. Besides, everyone needs a little fantasy in their reality every once in a while.